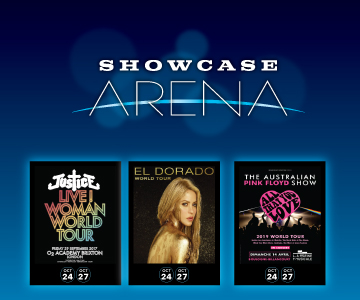 Between 2016 – 2019, Showcase Cinemas saw a 482 percent increase in music-related event attendance, and in the past year alone, a 15.27 percent increase. The steady rise has been due to a string of blockbuster concert films such as Joni 75: A Birthday Celebration and Bring the Soul: The Movie, which is the global box office record holder for event cinema. Showcase Arena events and screenings will occur at select theater locations and encompass all types of musical events that will have fans dancing in the theater.

"Showcase Cinemas is, and has always been, a supporter of music and the arts, and we continue to place an emphasis on this expressive platform in all of our theatres and through our programming," said Mark Walukevich, Senior Vice President of Film and Event Cinema Worldwide. "We recognize the power of music and the ability it has to bring people together, which is why we are thrilled to continue to offer this genre of film through Showcase Arena."

Coinciding with the launch of Showcase Arena, tickets are now on sale for the upcoming screenings of "Shakira In Concert: El Dorado World Tour" at select locations on November 13 and 17. The film follows the global superstar's 22-country world tour, highlighting what it took to put the show together after having to postpone it due to a vocal cord injury.

Over the next two months, Showcase Arena will screen the following films: