Showcase Cinemas Is Popping Once Again!

NORWOOD, Mass., Oct. 1, 2020 /PRNewswire/ -- Showcase Cinemas, a world leader in the motion picture exhibition industry, is celebrating the return of concessions in Massachusetts with "Free Popcorn Day" on Monday, October 5, offering one free small popcorn to anyone who visits one of Showcase Cinemas' open locations in MA. Earlier this week, MA Governor Charlie Baker announced that movie theaters could resume food and beverage service effective October 5 – and Showcase Cinemas is excited to get popping again! 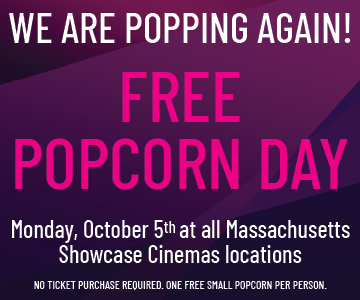 "Enjoying freshly popped popcorn is a huge part of the moviegoing experience, and something we know our guests look forward to when they come to the movies," said Mark Malinowski, Vice President of Global Marketing at Showcase Cinemas. "We're excited to be able to offer concessions once again and want everyone to come celebrate with us and enjoy a movie with free popcorn!"

For those who may want to enjoy their popcorn and concessions with close friends and family, Showcase Cinemas is also now offering great deals on private theater rentals. Private screenings in Massachusetts are now being offered for up to twenty guests, and are priced at just $99 for Bring Back films such as "Hocus Pocus" or "The Goonies", while first run films like "Tenet" or "The New Mutants" are just $199.

And for anyone who might need a reason to visit the movies or book a private theater rental, Showcase Cinemas announces "Halloween Horror Month" throughout the month of October, featuring Halloween cult classics and fan-favorite horror films. As a special add-on that can't be found anywhere else, Showcase interviewed the actors behind some of the most iconic characters in all of horror history, including Alec Baldwin ("Beetlejuice"),  Heather Langenkamp ("Nightmare on Elm Street"), Alex Winter ("The Lost Boys"),  Nick Castle ("Halloween"), Patrick Wilson ("The Conjuring"/ "The Nun"/ "Annabelle"), and Oliver Robins ("Poltergeist"). Exclusive interviews will accompany select films, with the full schedule as follows:

"All films, but especially horror films, were made to be watched on the big screen," continued Malinowski. "As actor Heather Langenkamp from Nightmare on Elm Street says, these movies were made specifically for giant screens so audiences can sit together in the dark and be transported to a place where you are terrified and are fighting the monsters together with the characters onscreen."

Nine Showcase Cinemas locations in Massachusetts reopened in late August, including Showcase Cinema de Lux locations in Dedham, Revere, Randolph, North Attleboro, Foxboro, Blackstone Valley, Lowell and Woburn, along with Showcase SuperLux in Chestnut Hill. All theater locations have reopened under the company's "Be Showcase Safe" health and safety program. The program has been developed and certified with J.S. Held, an environmental, health and safety firm led by noted toxicologists, epidemiologists and an Assistant Surgeon General, US Public Health Service (Retired).